How Will AI Change the Shipping Industry?

There was once a Coca Cola vending machine in Pittsburgh, Pennsylvania.

It was, to be kind, an unremarkable machine.

And it would have stayed this way if it weren't for David Nichols, a graduate in Carnegie Mellon University’s computer science department, who one day grew tired of walking the not insignificant distance to the machine only to discover that it was empty or stocked with warm cola.

Nicholls was cross. Driven by a need for quality caffeine, Nichols connected the machine to a network and wrote a program that updated his colleagues and him on cola stock levels.

The year was 1980, before the time of what we know as the Internet, yet the Internet of Things (IoT) had been born.

Today more than 17 billion devices are connected to the IoT.That number is expected to grow beyond 30 billion by 2023, representing a meta-network of sensors and controls that facilitate everything from self-driving cars and smartwatches to fridges that tell you when you're low on milk.

Though not as sexy as fresh dairy or feeding your cat remotely, IoT applications in the shipping industry are revolutionizing the way shipowners and logistics operators do business.

The key to success lies in the capturing and intelligent processing of the staggering amounts of data produced by these devices and applications, increasingly in real time.

We are no longer talking about the large volumes of data that were traditionally processed by analysts - we're talking Big Data.

How much is that?

Humans can't do this work. We need intelligent machines

Well, one petabyte could store about 13 years of HD video.

50 petabytes of data would house the written works of humankind, from the beginning of recorded history, in every language.

This is a broad and evolving definition that includes anything up to self-aware machines that are able to make 'empathetic' decisions - currently the stuff of science fiction. 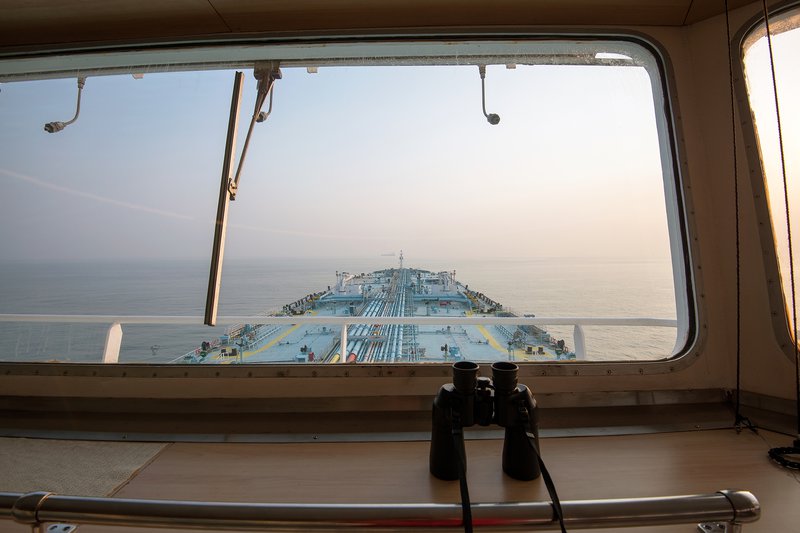 When used practically, the term AI usually refers to Machine Learning (ML), a branch of AI in which machines apply sophisticated algorithms that improve automatically through experience.

This includes reactive machines - computers that make decisions based on current data alone - and machines with limited memory - computers that draw on real-time data and weigh it against a limited bank of past data to make more 'intelligent' decisions.

AI is a thrilling possibility for progressive shipowners

IBM's Deep Blue and Google's AlphaGO were both reactive machines capable of beating the best in the world at chess and go, but not of using weather records, charts and the movements of other vessels to determine an optimal sailing course.

This level of decision-making requires limited memory, is already widely used in self-driving cars and will, soon enough, be at the heart of autonomous ships.

This doesn't make a ship autonomous.

But it is a significant step towards self-steering vessels, employing similar technology to the Advanced Driver-Assistance Systems (ADAS) in cars to collect a continuous stream of data from a vessel’s environmental surroundings, identify and track potential conflicts, and efficiently display the knowledge in the wheelhouse.

It's a thrilling possibility for progressive shipowners.

But even with the exponential growth rates of technology, we are still at least a few years away from the first ship without a human at the helm.

In the meantime, AI promises tremendous wins in operational efficiency.

Cost reductions are the low-hanging fruit for operators incorporating AI

It is important here to draw the distinction between automation and AI.

It is full automation that has helped Rotterdam's Maasvlakte II shipyard move 25-50% more containers per hour than any other terminal in Northern Europe.

Cost reductions are the low-hanging fruit for operators incorporating AI.

The company's commitment to spend a further 18 months employing Microsoft's AI capability to optimize their network operations and train 200 new AI specialists to work with their existing 1000+ software engineers, suggests that $10M is just the tip of the iceberg.

Combining IoT, AI and physical interventions like drones, operators will transform maintenance management, pre-empting costly and unnecessary repairs through the prevention and timely correction that is made possible by ongoing data vigilance.

Constant collection of voyage-impacting data and AI predictive analysis will ensure that vessels are always sailing the best route at the best speed, avoiding port delays and bad weather, identifying the best return route and schedule so that ships don't sail empty.

For example, AI startup MAANA has helped a leading transportation and logistics company reduce time spent on port omission decisions by 99.7%, cutting a 6-hour port rerouting analysis down to 60 seconds.

The shipping industry is ripe for disruption

Further gains will be made in safety management and compliance with environmental regulations, critical from January 2020 when the IMO’s new sulphur (sulfur) emissions cap comes into force.

The shipping industry, a natural producer of huge amounts of data, is, to borrow a now-ubiquitous phrase, 'ripe for disruption'.

At every step in the supply chain, there are opportunities for stakeholders to use AI to positively augment their operation.

But more integrated data also means greater visibility of the supply chain itself, opening opportunities for players to move into complementary territories up and down the chain.

The convergence of AI and IoT represents the dawn of a more connected intelligence.

As the shipping industry’s approach to AI begins to mirror AI itself (constant and adaptive learning), changes and developments in this field are going to leap exponentially.